Here at Diverse Learners we do our best to raise awareness of dyslexia and dyspraxia every day. This blog ends a week of tweetchats, tweets, Facebook posts and videos to do our bit for Dyslexia Awareness week ending on Sunday the 8th of Oct 2017.

We wish to extend our congratulations to Dr Rachael Major and thank her for taking up the invitation to write this guest blog sharing her experiences of what she has learnt about dyslexia during her research.

When I started my Doctorate in Education (EdD) in 2014 so many people said that they thought I was mad. I worked full time as Senior Lecturer in Nursing, had two children aged six and nine and volunteered for several organisations. What they didn’t realise is that the more people tell me that I can’t do something, the more it spurs me on to do it. I also decided that if I was going to get the doctorate that I wanted, I would be better off doing it when I did as my situation was unlikely to get any better. My parents are getting older and are likely to need me more in the future and my children were likely to become more dependent on me rather than independent. My older son has ADHD and was struggling at school academically as the work became more demanding and my younger son has autism, ADHD and moderate to severe learning disabilities.

I chose to research the experiences of registered nurses with dyslexia for a number of reasons, some professional and some personal. There seemed to be an increasing number of students coming onto our programmes, both student and qualified nurses, that either knew that they had dyslexia or we identified that they might have during their course and I felt we were not doing a great job at supporting them. A particular student who failed their last placement really sticks in my mind who was offered support but declined it and I wanted to know more about why this might be the case. Personally, I had become really interested in specific learning difficulties because of my children and wanted to learn more.

So, what did the EdD teach me? The answer is much more than I was expecting. I was humbled by the nurses who talked to me about their lives and experiences of having dyslexia. So many were diagnosed late at University, some as late as in their 50’s and how they had been told by teachers that they would never make anything of their lives because they were not academically able. This resonated with me as I had been told much the same at primary school (hence my stubborn determination to prove them wrong) and I was also being told the same about my eldest son. The more that they told me about their experiences at school, the more it may be convinced that he also had dyslexia. While I was doing the EdD I kept on reading about dyslexia and did some additional specialist courses to be support students. Armed with this information I approached the school to raise my concerns about him having dyslexia but was told by an educational psychologist that “he couldn’t possibly have dyslexia because he had made progress”. It was the stories of the nurses in my research study that encouraged me to take this further, as those who had been diagnosed late found the experience very emotional and reflected back with anger and sadness on opportunities lost. I ended up taking him to London for a private assessment, against the SENCO’s advice (as it would make no difference to the provision offered by the school) and it was the best decision that I have ever made. Yes I was right, he does have dyslexia and dyscalculia.

Clear diagram showing how people who have dyslexia, dyspraxia, AD(H)D and Autism can share characteristics.

He is now accepting support which he would not before the diagnosis and the attitudes of most of his teachers have changed in a positive way. The EdD has empowered me to fight for him but also ensure that the provision within our organisation has been improved. We are including inclusive teaching and learning methods to support those who have not yet been diagnosed or those who do not want to be treated differently (another theme that came up within my research). The process for diagnosis has been improved and we now pay for a full diagnostic assessment for those who want it. We are a small organisation and come from a jurisdiction which does not have any disability legislation so Disabled Student Allowance is not available, but the additional training that I have done has allowed me to support the students and I am working with colleagues to ensure that others within the department are also appropriately trained.

The nurses also discussed so many effective strategies that they used both in practice and in academic settings to ensure that they were safe and successful. Recognition of these strategies by those who support nurses, such as managers and lecturers, would be helpful to all nurses and in particular those with dyslexia. I hope to publish the findings of my research in the near future. 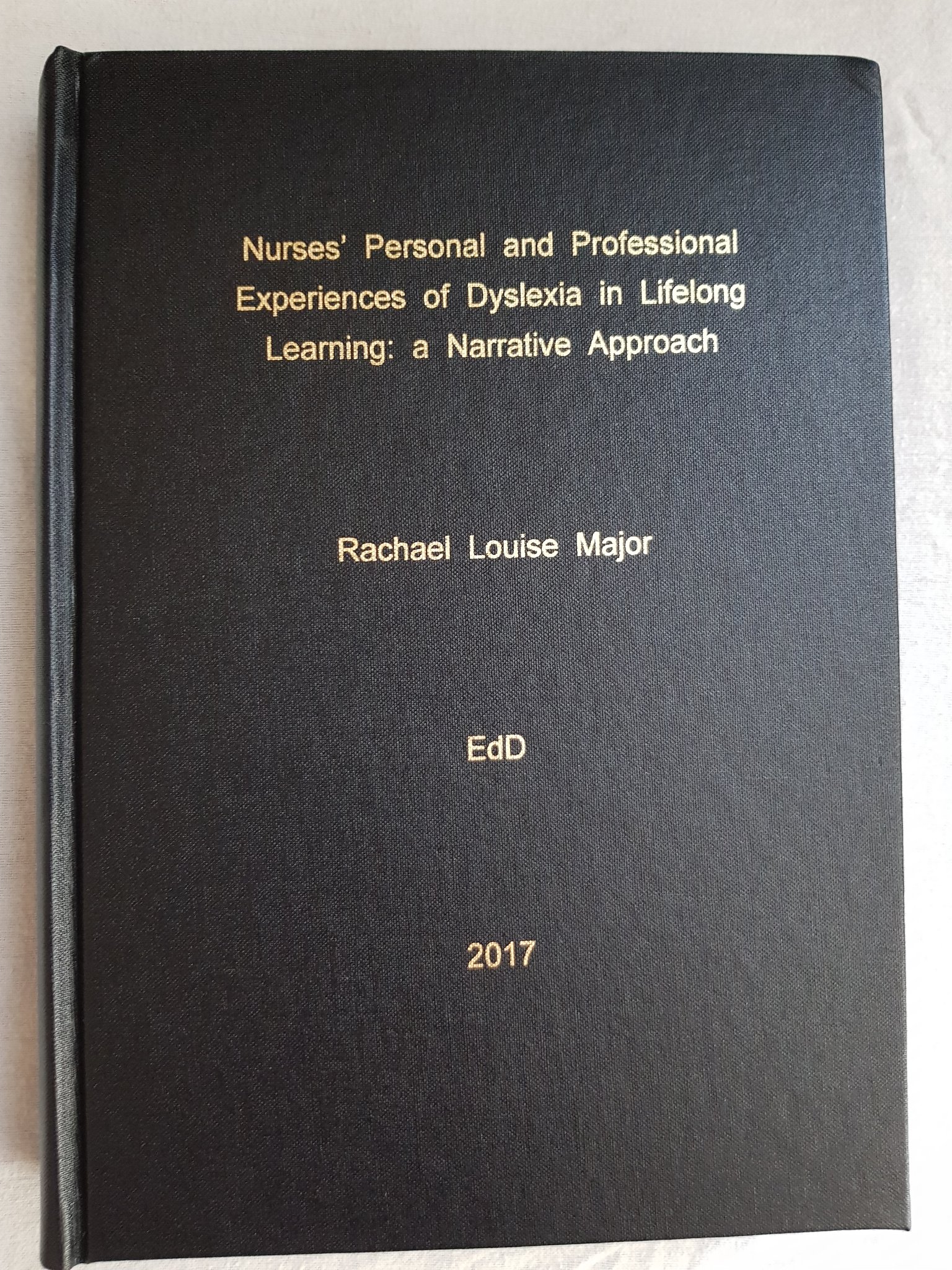 Finally going back to those who said I was mad to do my Ed D in the first place, they were probably right! It was hard and I had to keep reminding myself that it is supposed to be hard, however, for me, it was well worth it. I learnt so much; about myself and what I was capable of and about dyslexia which I have used professionally and personally. Conducting the research was a privilege and something I would love to continue to do in the future but ultimately, I hope that the research I have conducted will help the nursing profession to understand dyslexia for the benefit of present and future nurses.

This entry was posted on Saturday, October 7th, 2017 at 9:45 pm. You can follow any responses to this entry through the RSS 2.0 feed. Pinging is currently not allowed.